A stable visual perception requires interaction of different visual cues in the environment including motion and shape cues. One example of such interaction is the motion streak. Motion streaks are static image features that induce the sense of motion, e.g. blurred static lines are frequently used by artists to provide the impression of motion in still images (Figure 1, above). Another stimulus that is commonly used to study such interaction is the dynamic Glass pattern. The dynamic Glass pattern consist of multiple display of static Glass patterns over time. Even though coherent motion vectors are absent in such display, a strong sense of motion is perceived along the orientation of the static patterns. The perceived motion is believed to be a result of interaction between form and motion processing mechanisms. However, the relative contribution of motion and form processing mechanisms in the perception of dynamic Glass patterns in not well understood.

In this study, we used dynamic Glass patterns (Figure 2) to the study the interaction of motion and form perception in visually normal adults. Participants had highest sensitivty to real directional motion followed by implied motion and the lowest for static patterns. The difference in the performance was due to the difference in pooling of local orientation/motion cues at global processing stages. 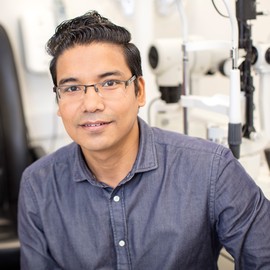 My research interests include using psychophysical methods to investigate visual attributes such as motion and shape perception in normal and clinical populations.